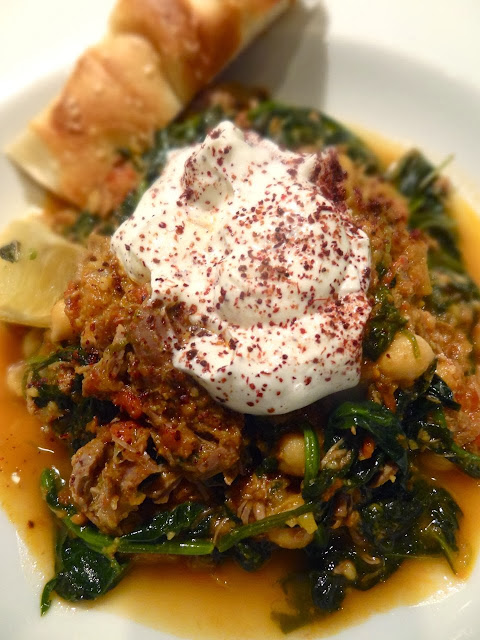 Inspired by a memorable Persian lamb stew that I enjoyed a few weeks ago at Takht-e Tavoos, the third sibling in a quiet College Street empire of Persian restaurants run by Alireza Fakhrashrafi and Danielle Schrage, 'Dizi Sanghi' is a two part meal with the broth decanted into a soup bowl, followed by the lamb, beans and vegetable stew served in a tall stone pot, called a dizi. Coupled with my recent discovery of Lebanese grocery/deli/bakery Arz Bakery & Fine Foods, on the way back from Diana's Seafood, I was overwhelmed with the treasure chest of exotic Middle Eastern and Mediterranean produce at Arz, from their mountains of baklava, aisles of olives, multitude of mezze including tabbouleh, fattoush, hummus, falafel and kebbeh, to fresh dates still attached to the branch. The day I was there, fresh warm pita was being brought out straight from the ovens, and families who obviously knew when to arrive on a Friday afternoon, were hoovering them up as fast as the kitchen could bake them. 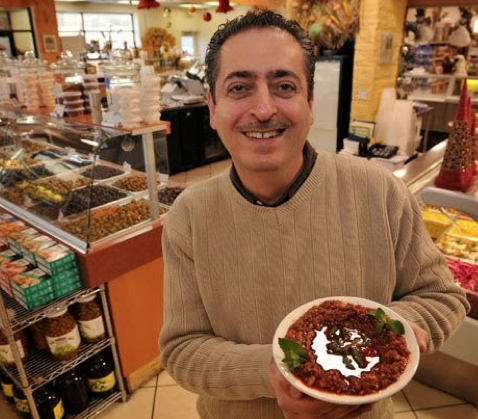 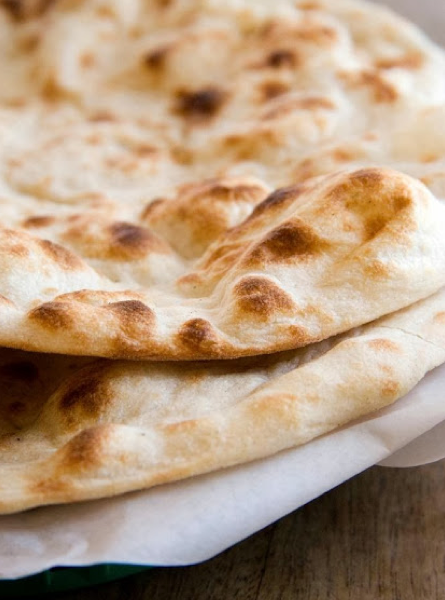 Pita bread warm from the oven 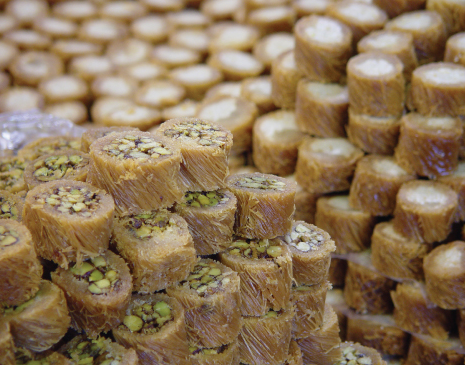 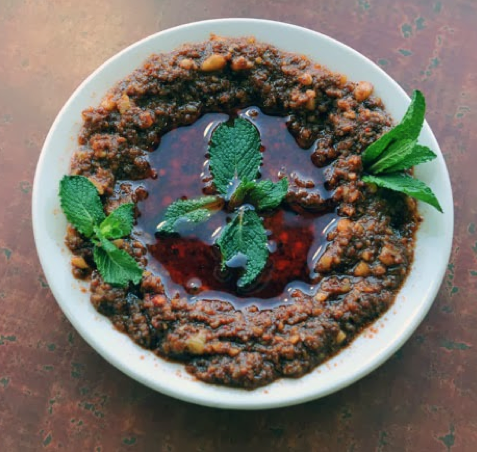 Muhamarra, a tangy spread made with walnuts, oil, pomegranate molasses,
lemon juice and Aleppo pepper powder made from sundried in Syrian chilies

Run by Lebanese born Armand Boyadjian, Arz has been around since 1989, starting first as a bakery before branching out into the grocery business. It now has a halal butcher, shawarma restaurant, cheese counter, prepared food counter and much more. It was however, the Persian 'Barbari' flatbread, cardamom tea, Lebanese olives, Lamb Kebbeh and Baladi, a soft, white Lebanese cheese, that I came away with as part of my precious culinary cache, and inspired the evenings dinner — an impromptu Middle Eastern repast. 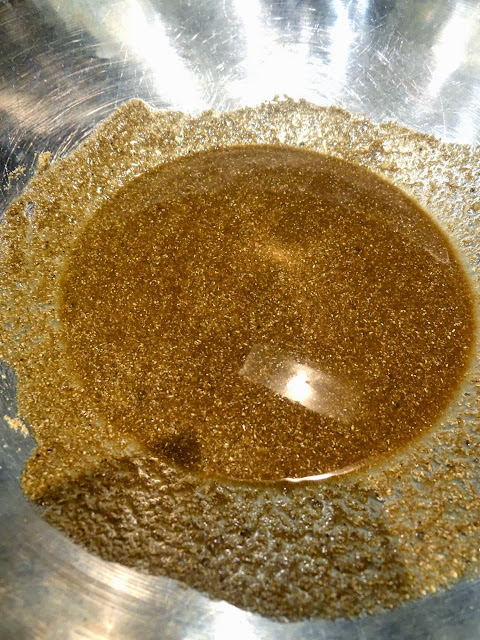 Common to many countries of the Middle East, lamb stew is made up of kebab cut pieces of lamb that are stewed with tomatoes. This hearty, healthy and low cal Middle Eastern Lamb Stew recipe from 'Eating Well', starts with lamb being marinated in an aromatic blend of classic Middle Eastern spices, then simmered with canned tomatoes, chicken broth and minced garlic. Finished with fresh spinach and fibre-rich chickpeas, the brothy stew is bright, full flavoured and reminiscent of the comforting Dizi Sanghi I enjoyed at Tavoos. I served the stew in the same manner, with the broth and stew prepared as a two-part meal. Topped with a crown of thick Greek yogurt sprinkled with bright red sumac, and thick slices of glossy barbari flat bread still warm from the oven, the Persian bread was perfect for scooping up every last drop of the thick broth and soft fragrant Lamb, Spinach & Chickpea Stew. 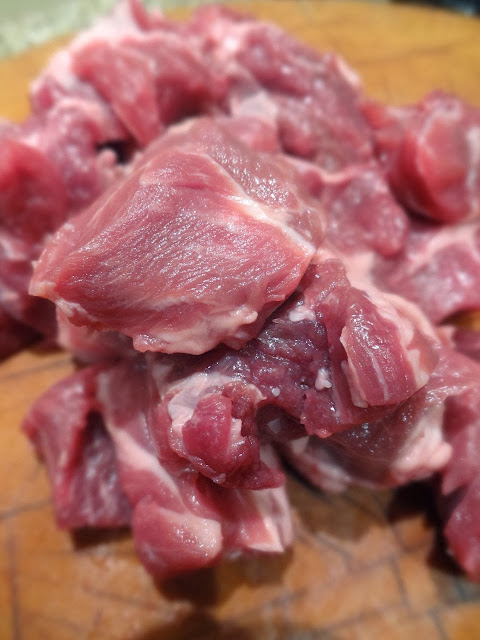 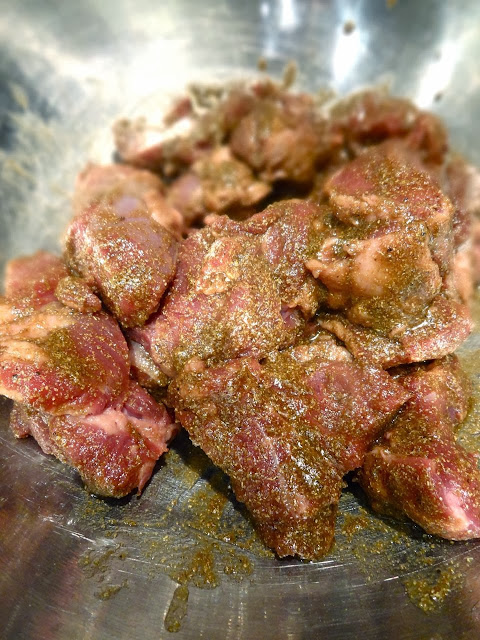 The lamb is mixed with the marinade and tossed to coat 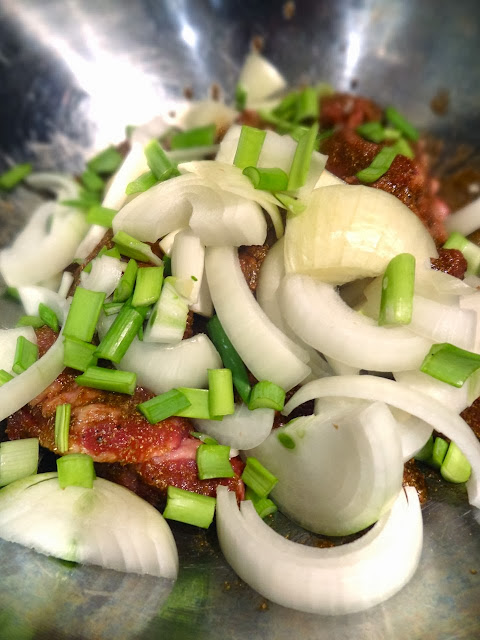 Two chopped onions are added on top of the marinating lamb 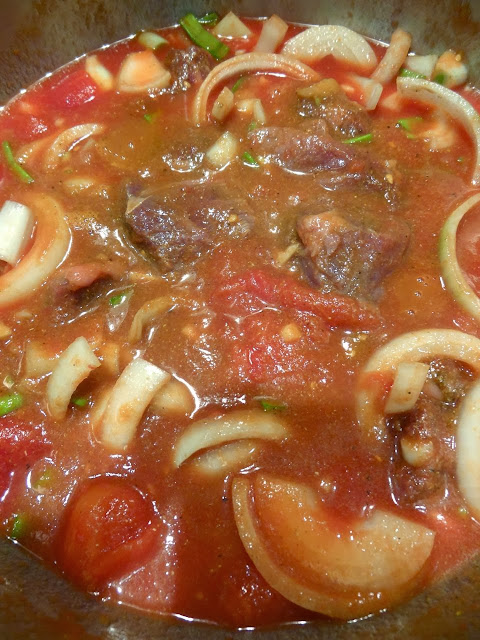 A can of tomatoes, chicken stock and minced garlic is brought to a simmer in a large pot, to which the marinated lamb and onions are added 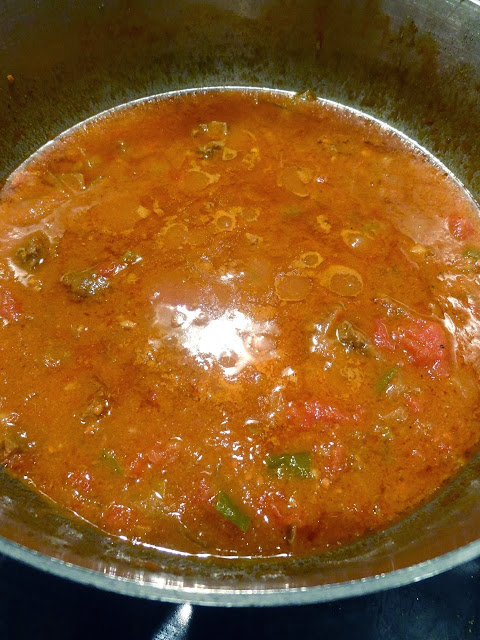 Covered and reduced to simmer over low heat for 3 hours, the stew has become rich and wonderfully aromatic, filling the kitchen with the most intoxicating smells 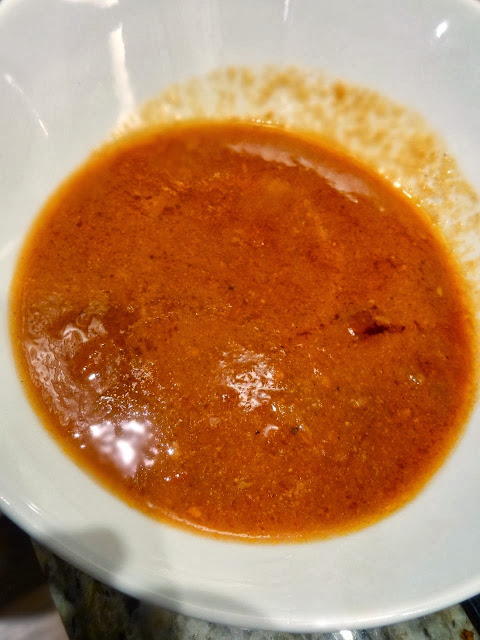 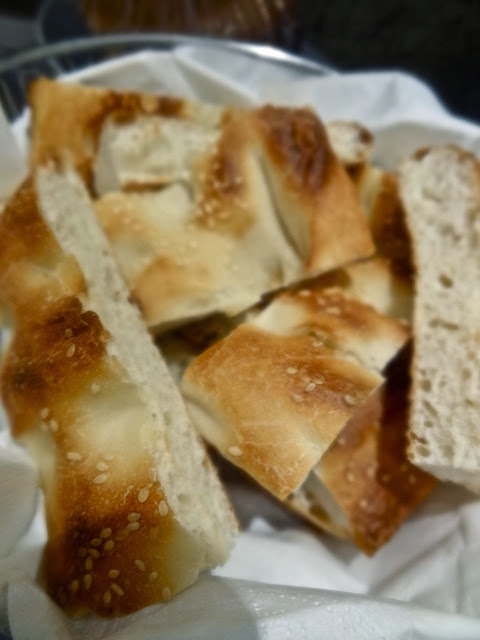 Persian flatbread warmed in the oven and sliced and served with the soup,
stew and Lebanese Baladi cheese 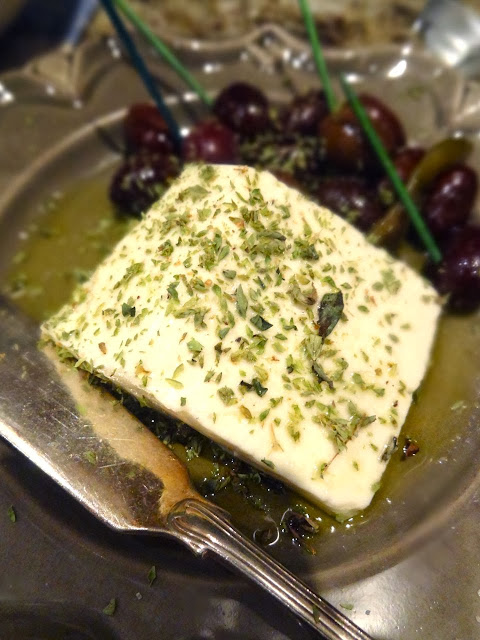 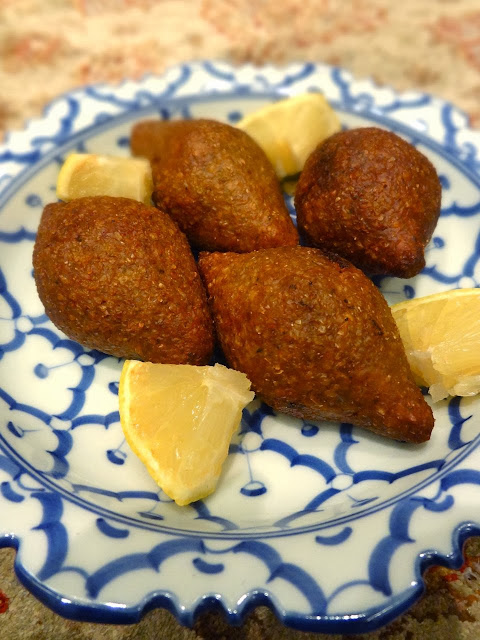 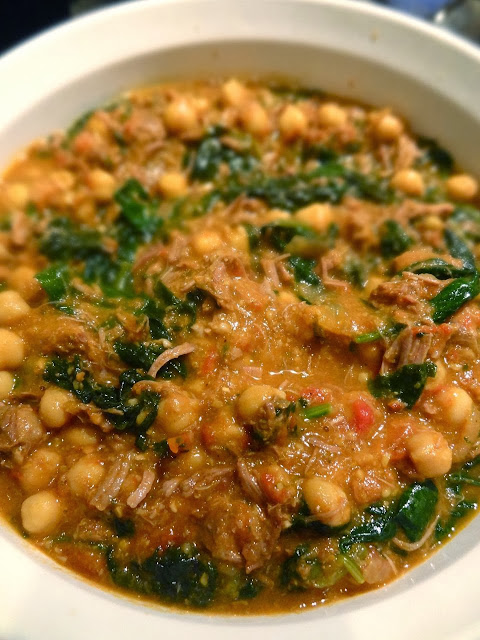 The lamb, spinach and chickpea stew is served after the soup, 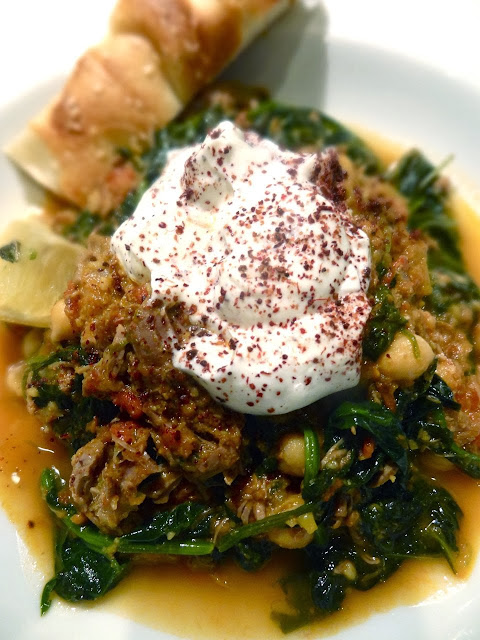 Served with Persian flatbread and thick Greek yogurt garnished with sumac,
the stew is actually quite light but enormously flavourful 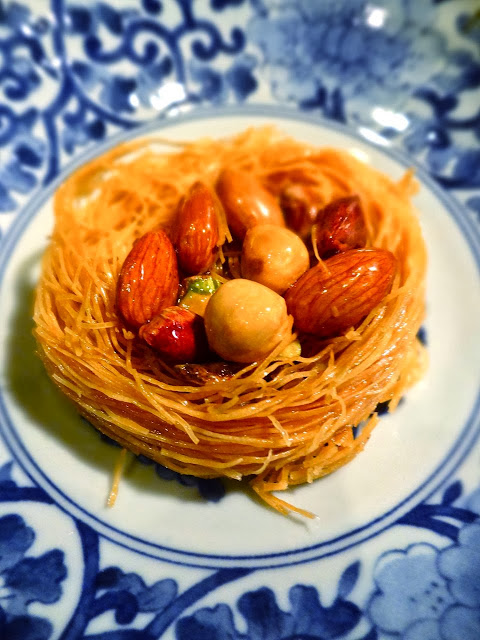 
Mix the oil, cumin, coriander, cayenne, salt and pepper in a large bowl. Add the lamb to the spice mix and toss to coat well; top with chopped onions. Meanwhile, bring the tomatoes, broth and garlic to a simmer in a large pot over medium-high heat, then add the lamb and onion. Cover and cook until the lamb is very tender, about 3 to 3 1/2 hours on low heat.

Skim any visible fat from the surface of the stew. Mash 1/2 cup chickpeas with a fork in a small bowl. Stir the mashed and whole chickpeas into the stew, along with spinach. Cover and cook on high until the spinach is wilted, about 5 minutes. Serve immediately with Persian Barbari flatbread and a bowl of Greek yogurt garnished with sumac.