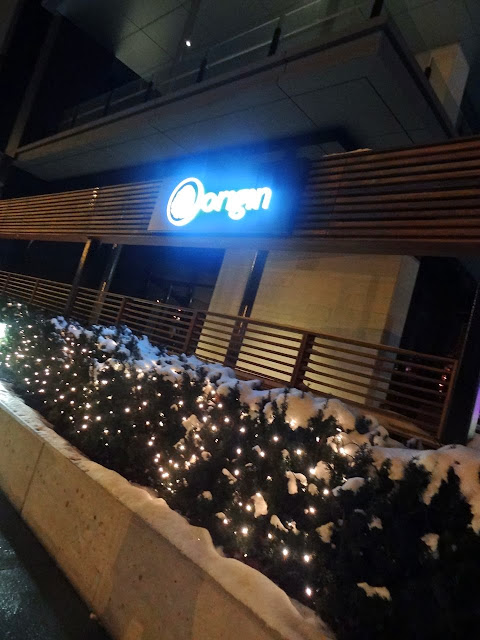 Having enjoyed a leisurely lunch at Claudio Aprile's Origin North at Bayview Village last week, we decided to explore the darker side — dinner at the restaurant on a snowy December evening. Celebrating the diverse cuisines of the world, Aprile’s uptown Origin North shares the same DNA, and most of the menu with the other Origin locations, but it’s a unique restaurant in its own right. As Chef Aprile explains, "It’s a different demographic, and it’s exciting to learn about the neighbourhood and create dishes that will resonate with the people living here. For example, there’s a large Asian population in the area, so I wanted to explore that even further. It’s a natural fit because I love working with Asian foods and ingredients.” And the cooking is excellent. No small wonder because Aprile spends more of his time at Origin North, watching over the kitchens and developing his newest dishes. 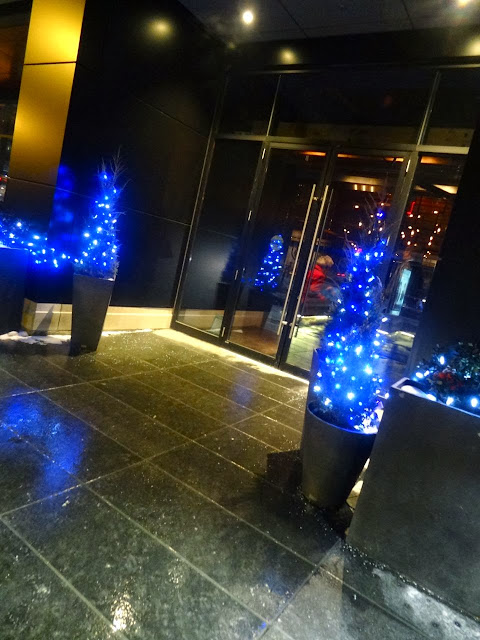 The festive entrance to Origin North in the evening 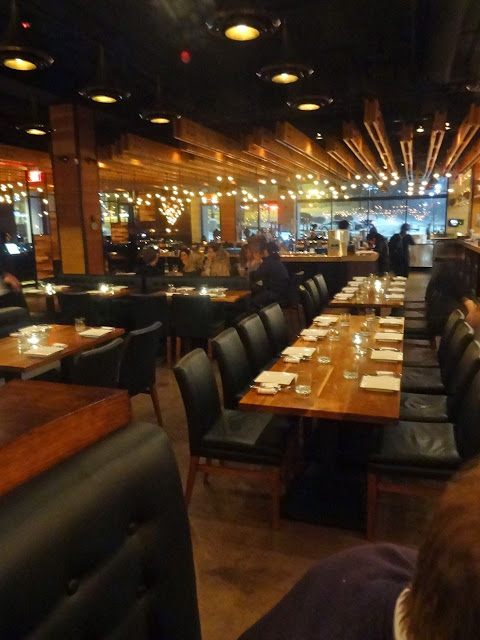 Designed by Toronto-based interior design firm Mackay & Wong, the interior exudes a refined and warm industrial-chic aesthetic. The space is spacious at 12,000 square feet, but handsomely detailed and suffused with outdoor light, with bright floor-to-ceiling windows, polished concrete floors, industrial lighting fixtures, studded black leather banquettes, and massive Douglas Fir wood beams suspended from the ceiling, which create a warm and inviting space despite the enormous size. But the main event is the food, and having returned for a second time in less than a week, it's worth the drive north of the 401. 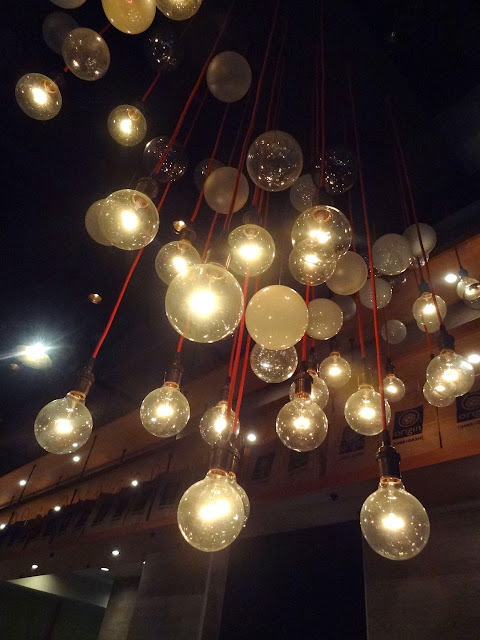 Cascades of oversized bulbs hang over the dining banquettes 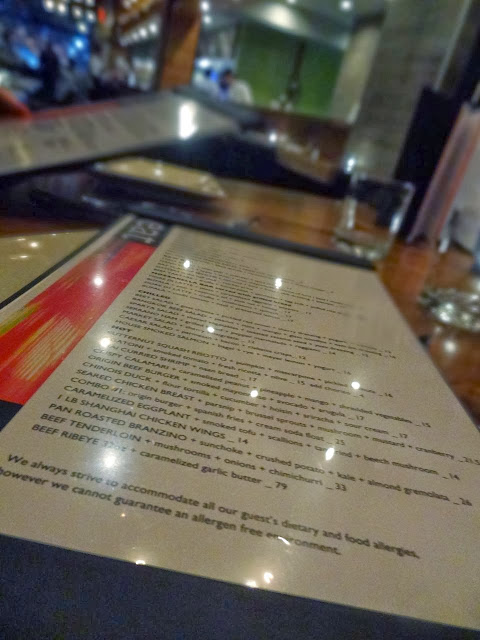 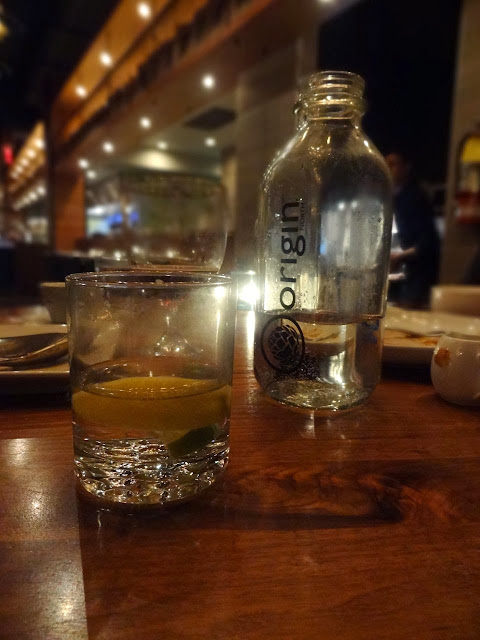 Q-Still and Sparkling Water is made in-house at Origin 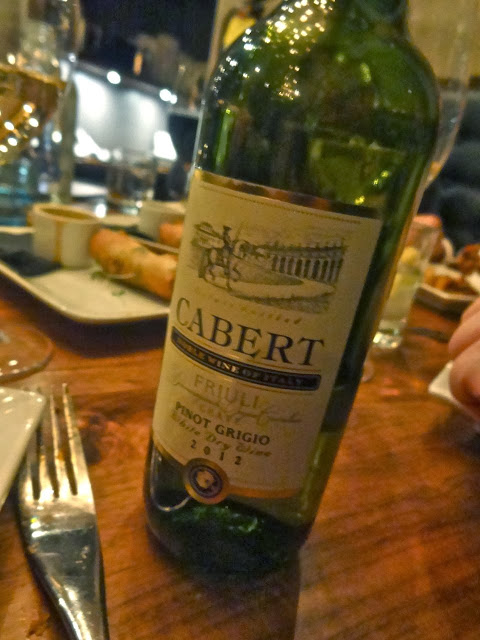 Wines are offered by the glass, demi or full bottles, like this Cabert Pinoit Grigio from Fruili 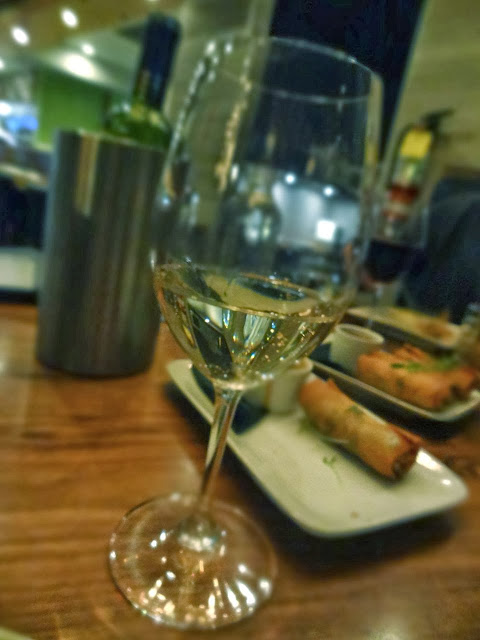 One demi bottle served 4 glasses of wine, quite a good deal 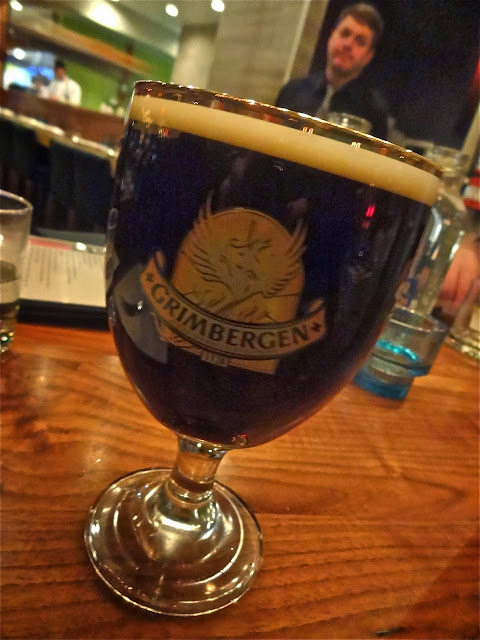 Interesting beers are available such as this Belgian Grimbergen,
which like most Belgian beers come in their own unique glass

Having only dipped our toes into the luncheon menu the previous week, we dove into the dinner menu with abandon and ventured further in Chef April's sea of Asian-inspired culinary offerings. Starting with a selection of tapas-style starters, we began with Masa Chips with avocado, salsa and pumpkin seeds, a double order of Chicken Spring Rolls and some Spicy Spanish Fries with chorizo and manchego. The Masa Chips with Avocado were good, but not quite as good as the extraordinary version Chef Steve Gonzales made at Origin's downtown location, before he left for greener pastures — Valdez on King Street West. 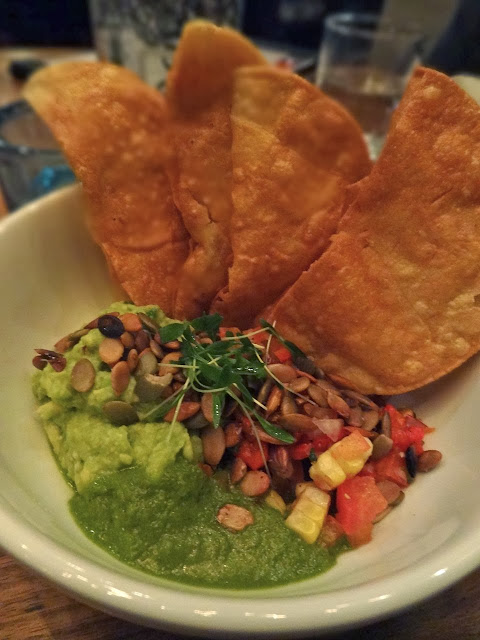 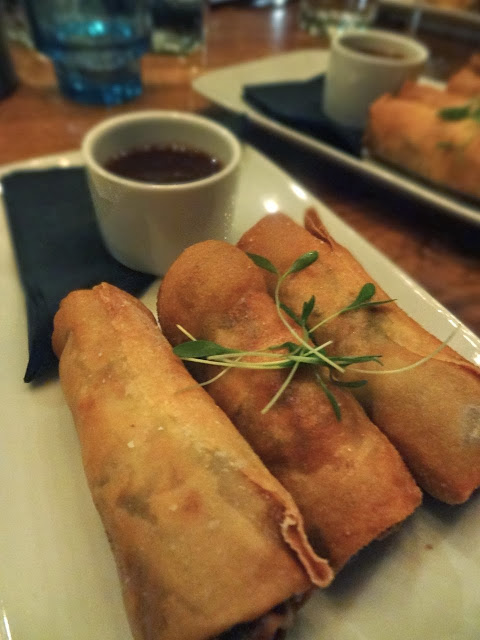 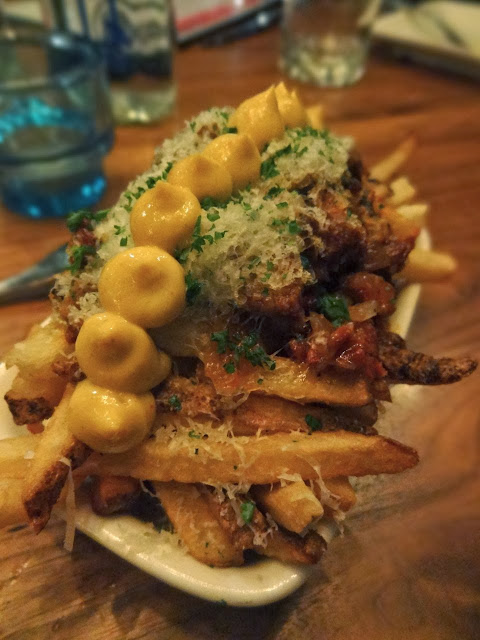 We followed with two selections from Origin's Raw Bar: A Sashimi-Style Tuna Salad with asian pear, avocado and spicy ponzu, and the Bay Scallop Seviche with coconut, lime, frozen chili dressing and plantain — a dish Joanne Kates loved and quipped "Three orders of that, a dry martini and a short espresso afterwards, and I’d go to heaven" — a woman after my own heart. The tuna was good, but the scallops were great. Joanne is right. 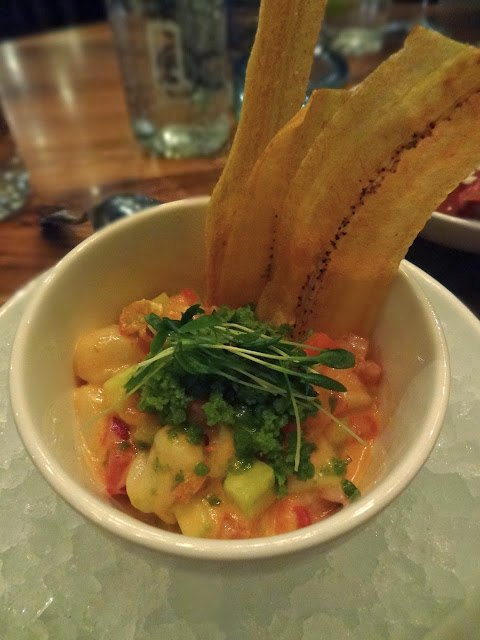 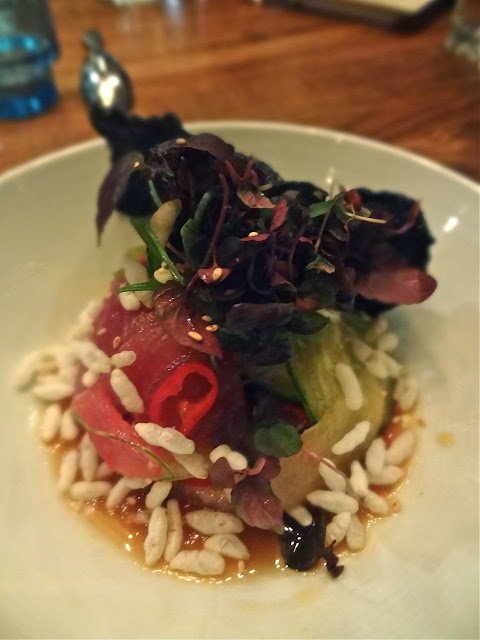 Enthralled with Chef Aprile's Beet Salad from my lunch before, I had to oder the dish again and show off to my table of guests. Like Joanne Kates, I could order the beets alone with a dry martini and drift happily off into dreamland. Three new dishes we also ordered were the House Smoked Salmon with bagel crisps, Meyer lemon and yogurt dressing, Crispy Calamari with caramelized peanuts and shredded vegetables and the outstanding Thai Curried Shrimp with naan bread. Our server Shawn had been proactive and organized the arrival of our dishes in deliberate groups, starting with the raw, followed by the lighter shared plates and finishing with a double order of wildly flavourful Thai Curried Shrimp. On his recommendation, we finished our meal with the Warm Cinnamon Sugar Doughnut with walnut caramel sauce and crème fraiche ice cream. One dessert, five forks and the dessert disappeared in moments. Next on the list: Origin in Liberty Village, but that'll have to wait until the New Year. 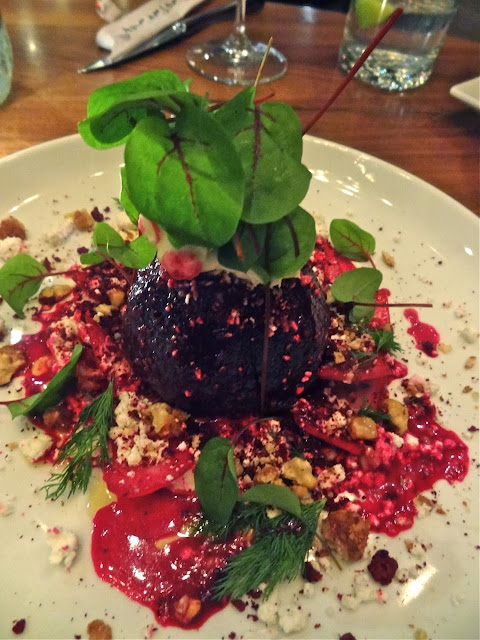 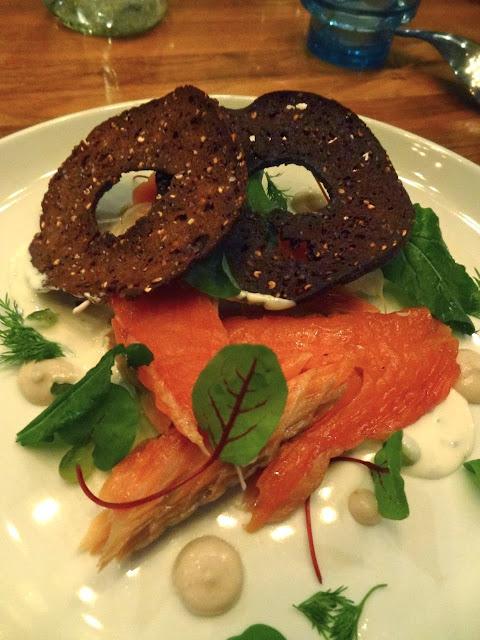 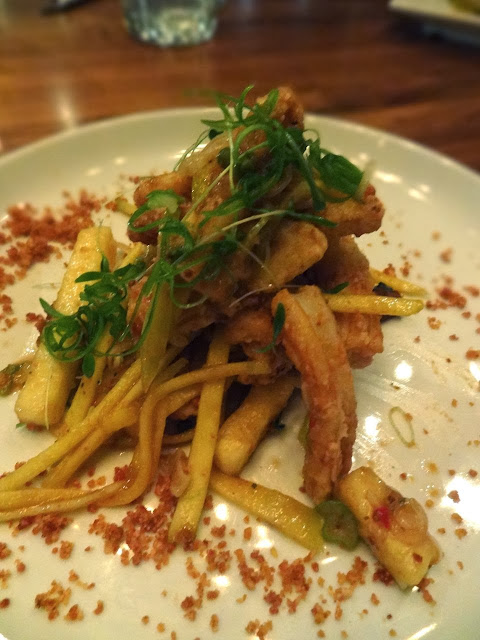 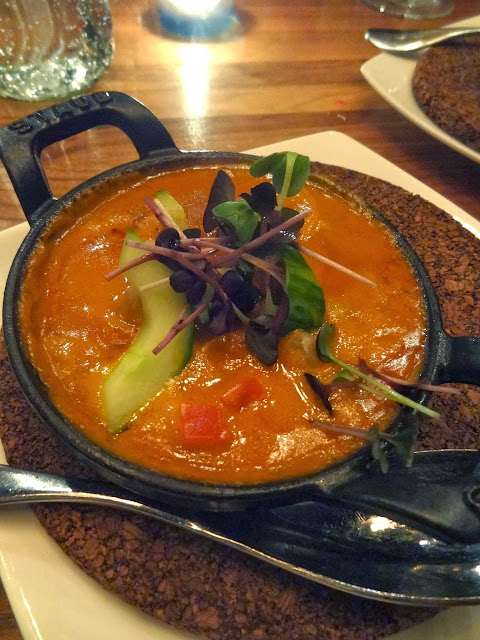 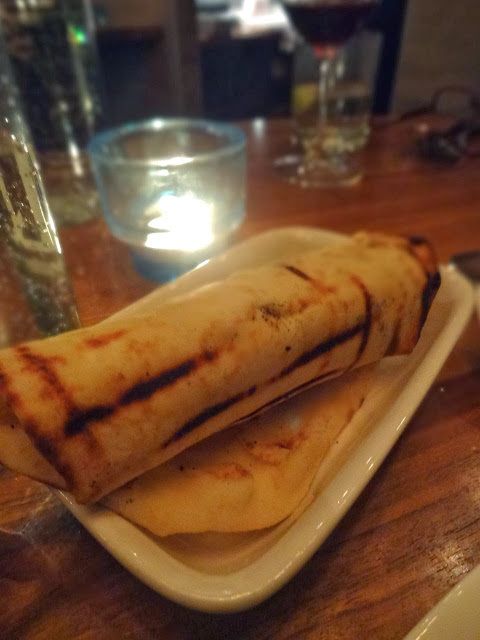 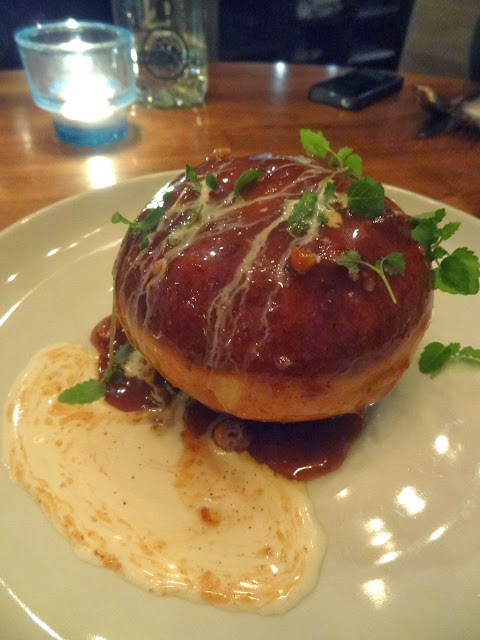 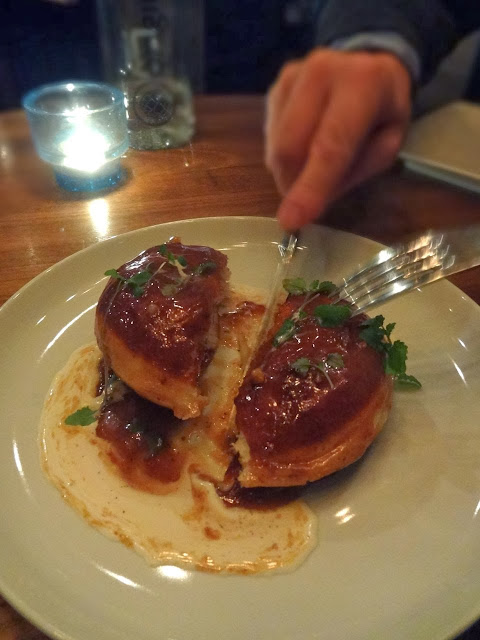