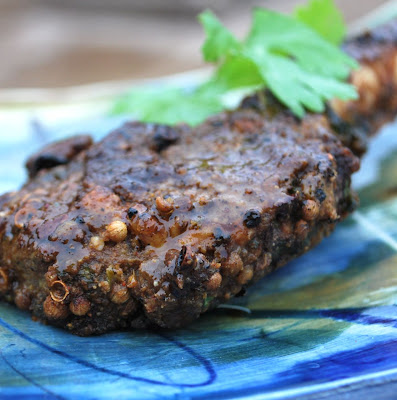 Grilled Lamb Chermoula is one of my favourite summer recipes. Fabulously fragrant and wonderfully aromatic, it's best grilled on the barbeque, making it a perfect dish for the warm summer months. 'Chermoula' is a classic marinade used in Algerian, Moroccan and Tunisian cooking, and is made using a robust mixture of aromatic spices such as cinnamon, coriander seeds, cumin seeds, cloves, paprika and cayenne. The spices are then tossed with a well-trimmed rack of lamb that has been cut into single or double chops, mixed together with a handful of garlic, some olive oil and a handful of fresh cilantro. It's that easy. 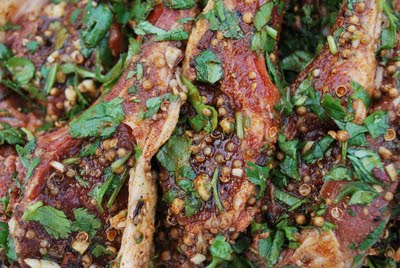 For the best results, the lamb should marinate for a couple of hours, or even overnight before cooking, to let the lamb become infused with the flavourful marinade. This recipe works really well with chicken and pork, and can also be used with fish, seafood and root vegetables. But it's with lamb that the Chermoula spices truly shine. Vibrant and full of flavour, this recipe is excellent served with a big bowl of tzatziki, which isn't very Moroccan, but it is delicious!


Using a heavy knife, cut both racks of lamb into single or double chops, as desired, and set aside. Break the cinnamon into small pieces and place in a food processor with the coriander seeds, cumin, cloves, paprika and cayenne and grind 2-3 minutes. In a large bowl, stir together the chopped garlic and olive oil, then add the lamb and toss to coat. Season with salt and freshly ground black pepper, then add the spice mixture. Toss it all together to ensure the lamb is thoroughly coated with all the spices. Then add the cilantro, and give it all a final toss to coat. Cover the bowl with cling film and chill at least 2 hours or even overnight — I even marinate it all in a big plastic baggie which makes storing it in the fridge very easy and saves on clean up! When ready, place the lamb on a hot barbecue and cook until the chops are grilled evenly on both sides. Serve on a big platter with a bowl of tzatziki on the side.