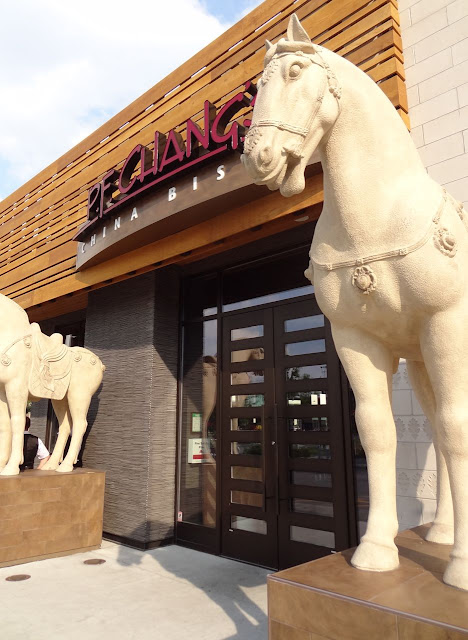 With over 200 locations worldwide, P.F. Chang's China Bistro made its first foray onto Canadian soil almost 2 weeks ago, at the Shops at Don Mills, with another 20 or 25 other Canadian locations slated to open in the near future. Specializing in American-Chinese cuisine, the US-based Asian food chain was first conceived and developed in 1993 by Paul Fleming (P.F.) and Philip Chiang (Chang) whose names were combined to create the 'P.F. Chang' moniker. 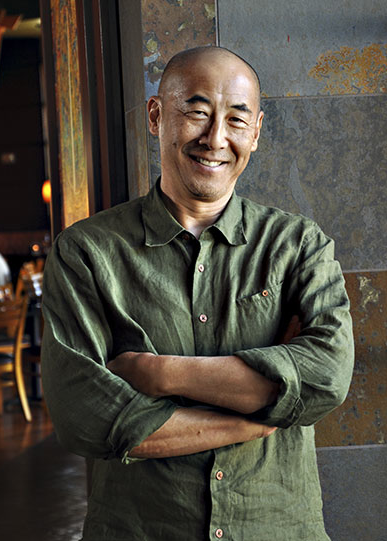 
Having co-founded a restaurant empire with over $1-billion in revenue a year, Philip Chiang has had a very interesting life. He grew up in Japan, his parents having fled China in 1949 when Mao came to power. His mother had family in California, and she relocated with Philip and his sister right into the heart of San Francisco's Chinatown. His mother, Cecilia Chiang, who'd grown up in a palace and never worked in a restaurant, opened an upscale Chinese restaurant called the Mandarin, which soon became the most famous Chinese restaurant in San Francisco, finally expanding to Beverly Hills as well. 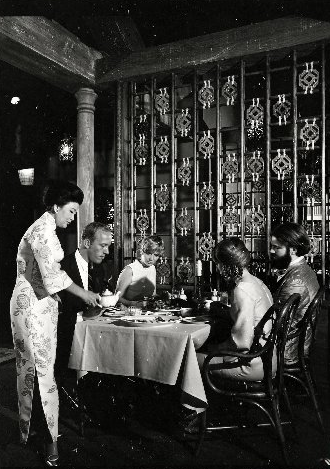 The original upscale Mandarin Restaurant in San Francisco, which opened in 1961 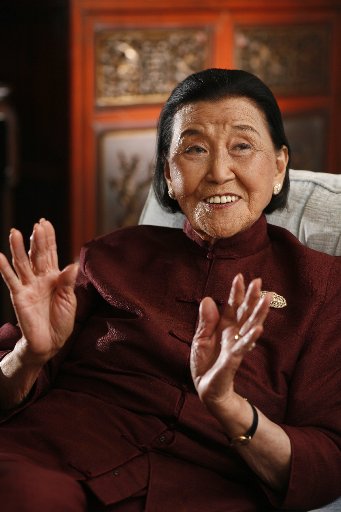 Philip took over operations at the Beverly Hills Mandarin when his mother went to China for extended visit, and soon caught the restaurant bug, opening up his own restaurant shortly thereafter, called Mandarette, which featured a more simplified cuisine with lots of small plates. One of his customers was Paul Fleming, who owned the Ruth's Chris Steakhouse franchise in California, and they became friends. When Fleming moved to Arizona, to open more Ruth's Chris, he couldn't find a decent Chinese restaurant, so he asked Chiang to help him start one. "I was the food consultant, he was the operations," says Chiang. 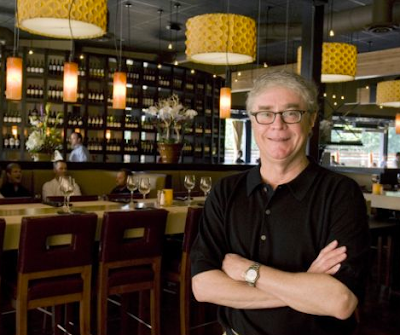 
The combination of Chiang's simplified Chinese cuisine and Fleming's insistence on having American-style service, a wine list and a dessert menu turned out to be a huge hit. For Chiang, the food he's created for P.F. Chang's is as Chinese as the palace his mother grew up in — "just simpler, fresher and not so cornstarchy and gloppy." Is Chiang in the kitchen these days? Hardly. "I'm mainly a goodwill ambassador for the company now," Chiang says. "I go into the test kitchen every once in a while, but the R&D staff does most of the heavy lifting." 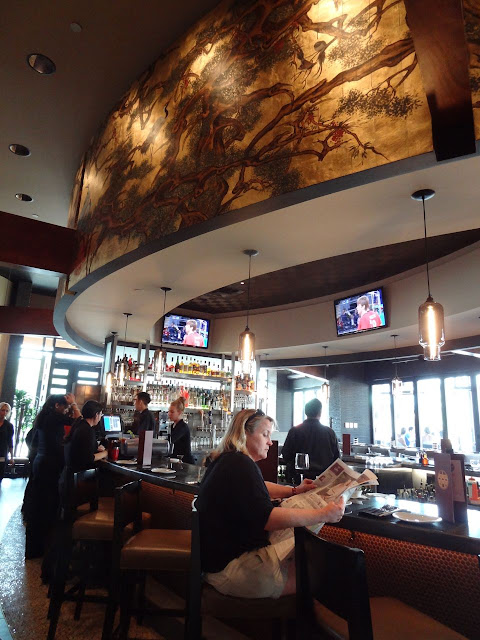 Often recognizable by the 11-foot tall horses that stand outside many of their restaurants, and the hand-painted panoramic narrative murals depicting 12th century ancient China, the relaxed and casual atmosphere, attentive service and stylish décor of P.F. Chang’s China Bistro is similar to other locations and offers cuisine inspired from five regions of China — Mongolian, Sichuan, Beijing, Shanghai and Hunan — but are given a contemporary approach in terms of presentation. Along with unique desserts and signature drinks, while also delivering attentive service, the restaurant caters to different dietary and cultural needs, offering a vast selection of gluten free and vegetarian dishes, plus none of the food uses cornstarch or MSG, and oil is minimally used. 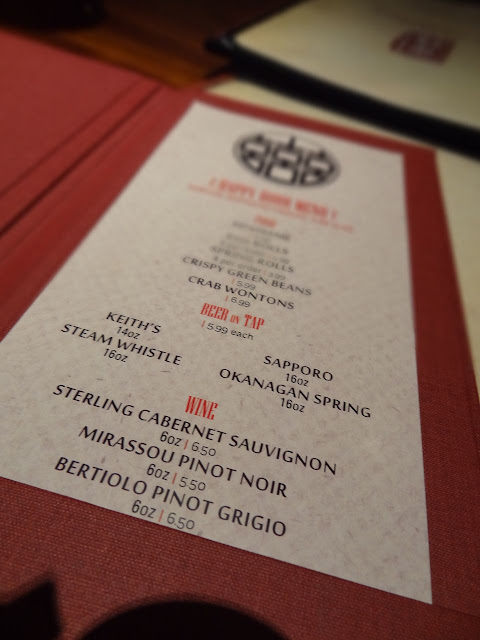 P.F. Chang's Happy Hour Menu with special prices on a selection
of appetizers, beers and wine 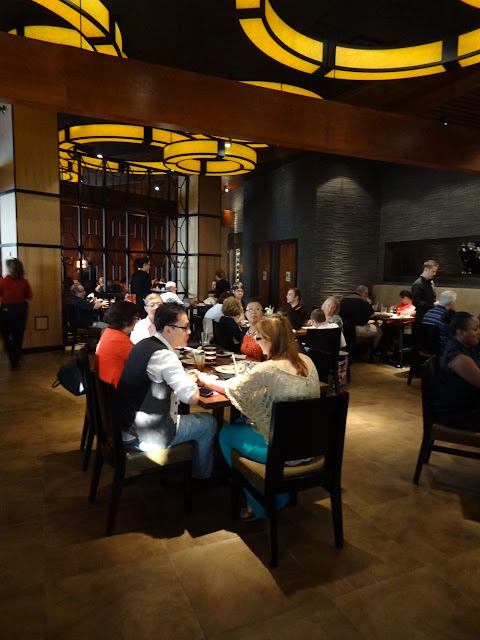 The interior of P.F. Chang's at the Shops of Don Mills

Serving up its signature Chinese food in an upscale casual setting, P.F.Chang's keeps the focus on family-friendly sharing platters and a popular Happy Hour Menu with value-packed prices on a selection of appetizers, beer and wines by the glass, with highlights including Spring Rolls with fresh vegetables and served with a sweet & sour dipping sauce, Crispy Crab Wontons filled with a creamy mixture of crab meat, bell peppers and green onions, served with a spicy plum sauce, Egg Rolls hand-rolled with marinated pork and vegetables, and served with a sweet & sour mustard sauce, as well as Crispy Green Beans lightly battered and served crispy with a spicy, tangy dipping sauce. 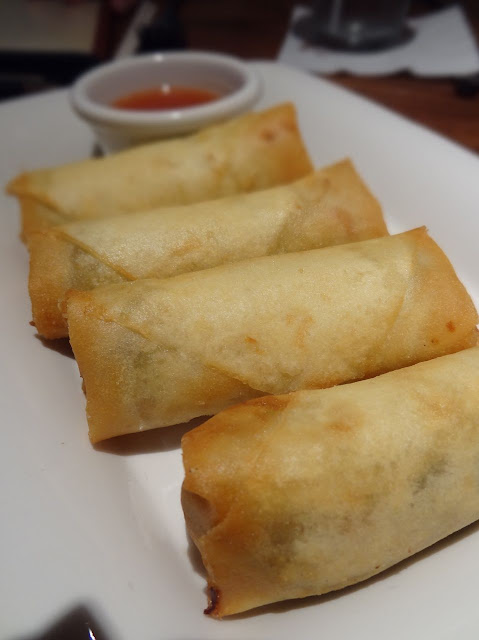 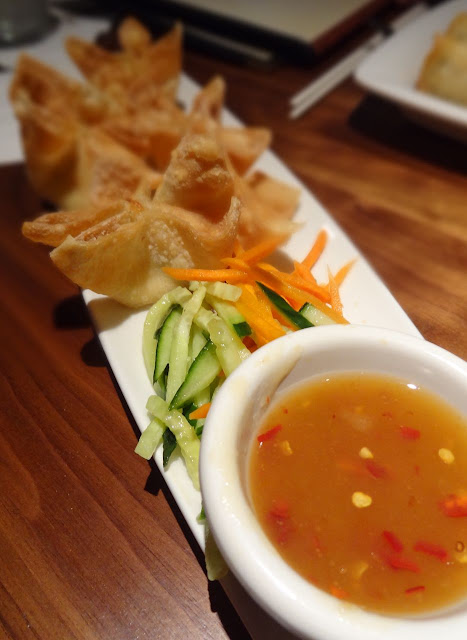 The selection of entrées we chose included delicious Crispy Salt & Pepper Prawns stir-fried in a salt and pepper mix of chili peppers, black beans, ginger and green onions, and served with a spicy mustard sauce, Kung-Pao Shrimp stir-fried with peanuts, chili peppers and scallions, Singapore Street Noodles with shrimp, chicken, vegetables and rice noodles stir-fried in a curry sauce, Chicken with Black Bean Sauce with green onions, garlic and black beans in a mild sauce, and a surprise dish which arrived that we didn't order — Sesame Chicken with tender chicken breast, broccoli, red bell peppers and onions in a spicy sesame sauce. 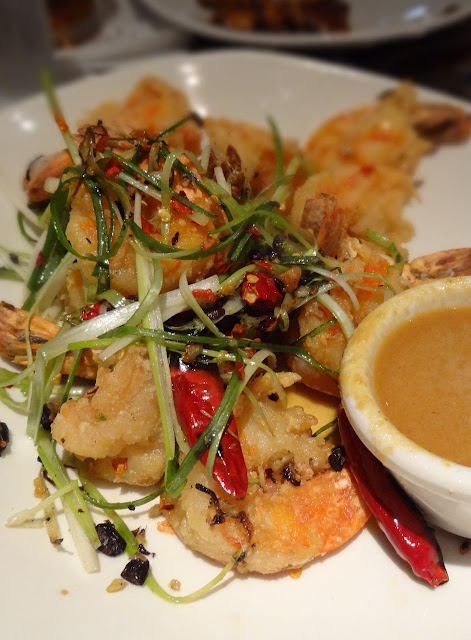 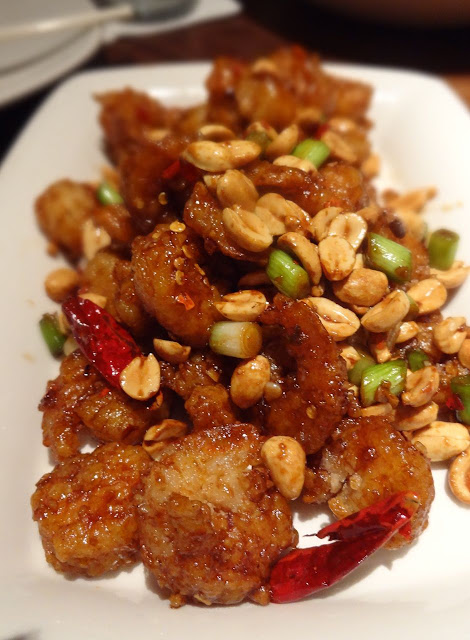 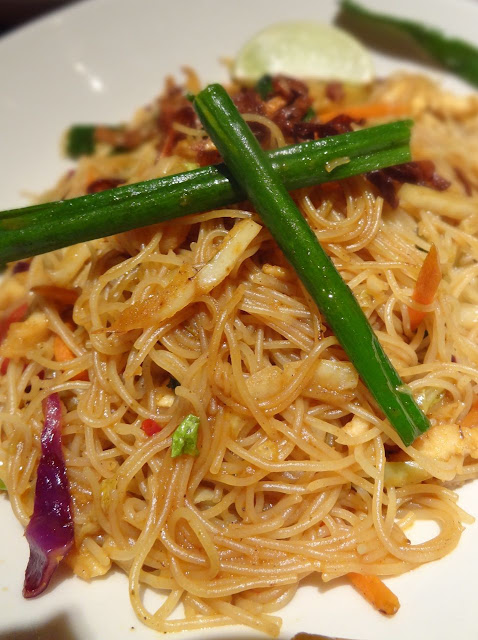 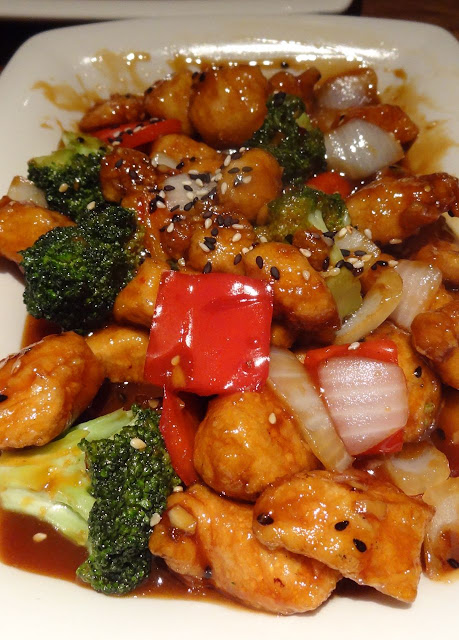 Signature desserts include a selection of full and mini-sized confections, designed for those with a sweet tooth or with just enough room to squeeze in one more dish. We decided to try two of P.F. Chang's mini desserts: a very lemony Mini Tres Leche Lemon Dream made with shortbread crumbs, lemon filling and cream topped with a candied lemon wedge, as well as the Mini Creamy Cheesecake with layers of cheesecake, raspberry sauce and graham cracker crust. Of course, no Chinese meal would be complete without an iconic fortune cookie. 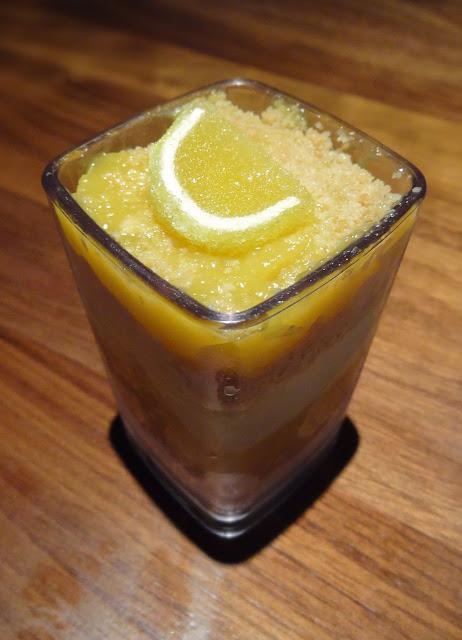 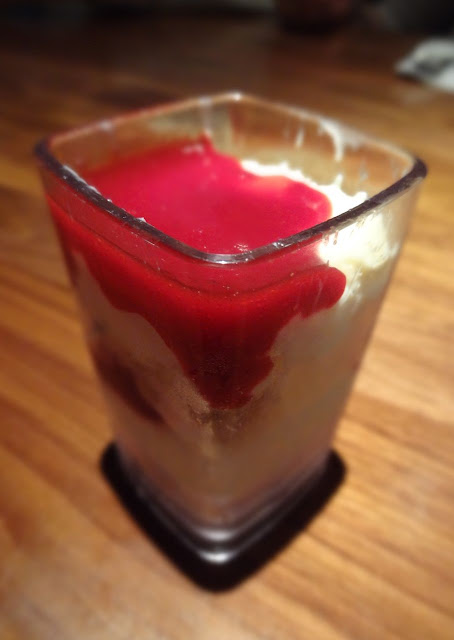 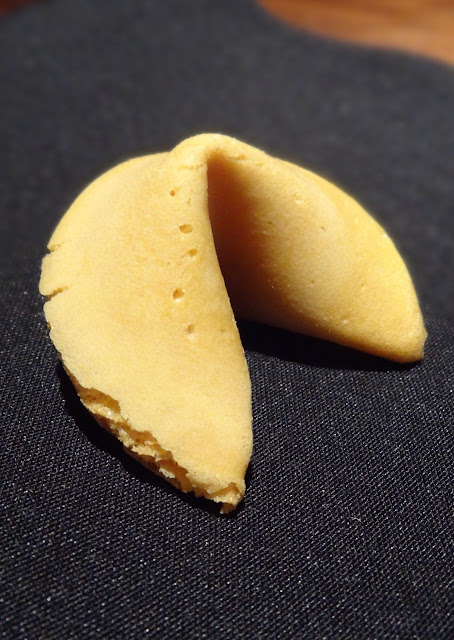 The iconic fortune cookie — an obligatory finalé to any Chinese meal 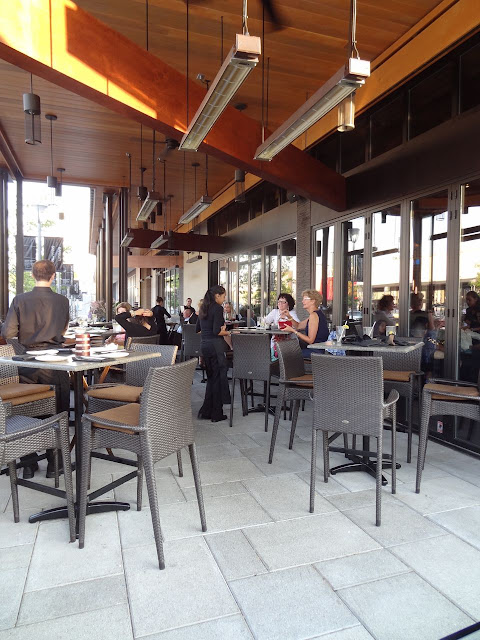 Some people don’t consider P.F. Chang’s high-pedigree. One, it’s a chain, therefore an auto-demotion on the palates of food snobs, and two, it doesn’t serve authentic or "real" Chinese cuisine. However, their unique brand of Chinese-inspired fare has obviously delighted the culinary taste buds and refined palates of Torontonians who, not being allowed to make reservations, have been willing to wait for up to an hour and a half to get a table into what must be considered to be, the city's newest dining hotspot. The good news is that P.F. Chang's is now taking limited reservations, providing that you're willing to dine by or before 6pm! 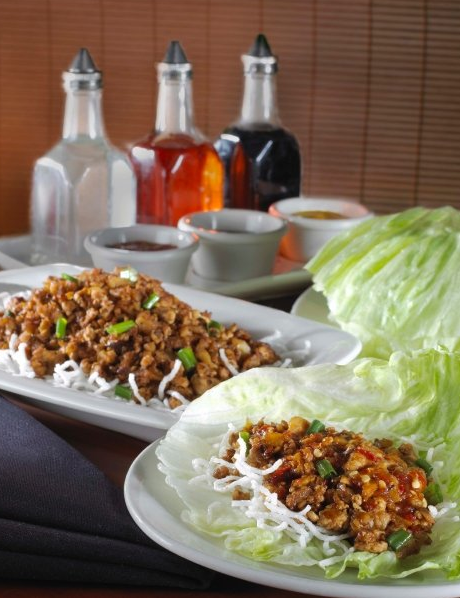 
Cover mushrooms with boiling water, let stand 30 minutes then drain. Cut and discard woody stems. Mince mushrooms and set aside. Mix all of the ingredients for cooking sauce in bowl, and set aside. In medium bowl, combine cornstarch, sherry water, soy sauce, salt, pepper, and chicken. Stir to coat chicken thoroughly. Stir in 1 tsp of oil and let sit 15 minutes to marinate.

Heat wok or large skillet over medium high heat. Add 3 tablespoons of oil, then add chicken and stir fry for about 3 to 4 minutes. Set aside.

Add 2 tablespoons of oil to pan, and add ginger, garlic, chilies, and onion, Stir fry about a minute or so, then add the mushrooms, bamboo shoots and water chestnuts. Stir fry an additional 2 minutes. Return chicken to pan. Add mixed cooking sauce to pan and cook until thickened and hot.

To serve, break the cooked cellophane noodles into small pieces and lay over the bottom of serving dish, then pour the chicken mixture over top of the noodles. Garnish with chopped scallions and a side of hot sauce. Let guests help themselves by spooning the mixture into lettuce leaf "cups" — roll them up and enjoy! 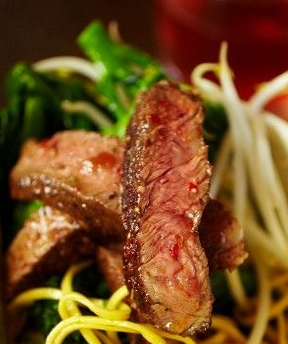 Combine the hoisin, orange juice and soy sauce with a whisk and reserve. In a small bowl, combine ginger, chili flakes and garlic with 2 tablespoons of vegetable oil. Add salt and pepper to the mixture and combine well. Add the rib eye steaks to the marinade, cover and refrigerate for 2 hours.

While the steaks are marinating, blanch the noodles and broccoli. Bring a large pot of water to a boil, place the broccoli in a wire basket and cook for about 4 minutes at a slow boil. Remove from the pot and place in ice water to stop the cooking process. Let sit in ice bath for a couple minutes until chilled.

In the same pot, cook Shanghai noodles until al dente, about 5 or 6 minutes. Remove and pour into a colander. Once the excess water is removed, place the noodles on a sheet tray, and lightly coat with soy bean oil, being sure to move the noodles to prevent them from sticking. Let cool to room temperature, moving occasionally.

Remove beef from refrigerator and allow to come to room temperature for about 5 minutes before cooking. Season with salt and pepper. In a very hot oiled sauté pan, place the steaks and let cook for 5 minutes on each side for medium-rare.

While the steaks are cooking, place 1 tablespoon of soy bean oil in a warm sauté pan and sweat the onions with 1 teaspoon of garlic, ginger and chili flakes. Once the onions are translucent, add the white wine and allow to reduce by 3⁄4. Add the hoisin mixture and stir. Let simmer for 3-4 minutes then add noodles. Toss the noodles with the sauce and allow the noodles to get hot, about 4 minutes. Add the blanched broccoli and continue to cook until noodles and broccoli are hot. Add the butter and continue to toss until noodles and broccoli are coated.

Place the noodles on a warmed platter. Place the beef on a cutting board and cut into thin strips. Lay the rib eye slices on top of the noodles and serve immediately with a garnish of fresh chopped scallions. 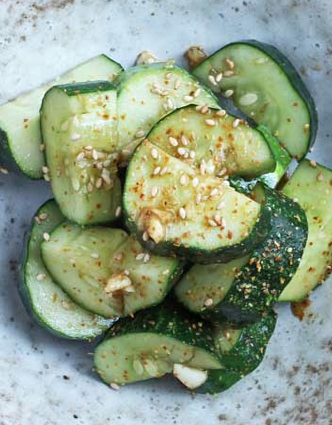 Combine the sauce ingredients in a medium bowl and mix together with the cucumbers. Sprinkle with sesame seeds and serve chilled.