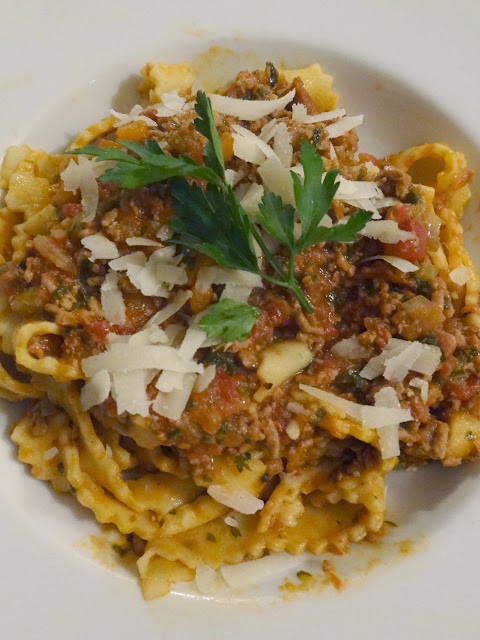 Inspired by an upcoming trip to Umbria in a few months, I thought it was time to explore Umbrian cuisine and cross one of the first hurdles — making homemade pasta for the first time. There are many recipes from which to choose — Marcella Hazan, Mario Batali, David Rocco to name a few. The ingredients are pretty much the same: flour and eggs. Maybe some oil. Maybe some salt. Sometimes two types of flour. Sometimes no eggs, just water. Even the proportions fluctuate from one cook to another. It's a culinary maze. 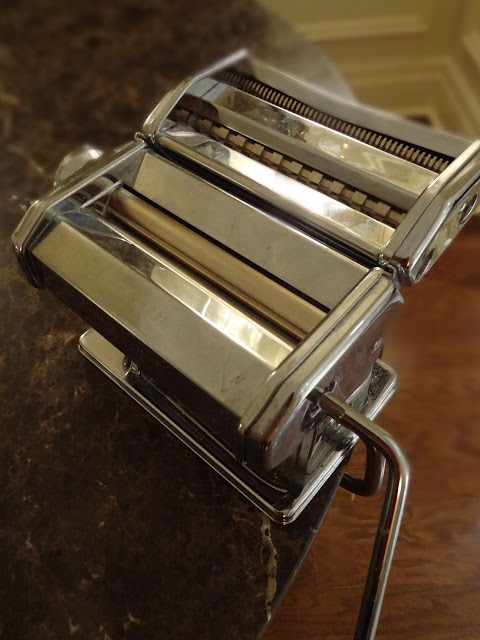 Searching for a traditional Umbrian pasta dough recipe, it became clear that a mixture of 50% Tipo-00 flour and 50% semolina flour was the method of choice — the mixture of soft and hard flours giving the dough a firmer texture hardy enough to balance with robust Umbrian sauces. So with the decision made and my pasta machine dusted off and polished, I embarked on my first attempt at making homemade pasta dough. 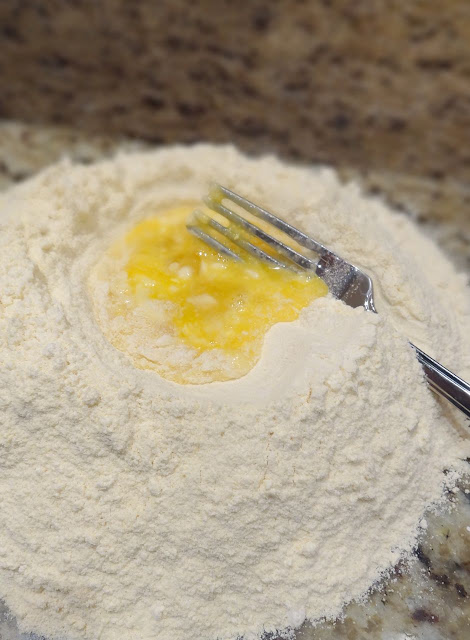 Simple ingredients of flour and eggs

It's actually pretty straight forward. I started by placing the flour on the countertop, making a well in the centre and cracking eggs into it. The eggs are beaten with a fork, then using the fingertips, the eggs are mixed with the flour, adding a little bit of flour at a time until it's all combined. The texture's a little crumbly but that's fine. Next, on a lightly floured surface, the pieces of dough are kneaded together for about eight to ten minutes until the dough becomes smooth and supple. It takes quite a bit of 'elbow grease' — some say it's how Italian grandmother's get such big biceps! When the dough's ready, it's formed into a ball, wrapped tightly in plastic wrap and set it aside for 30 minutes. 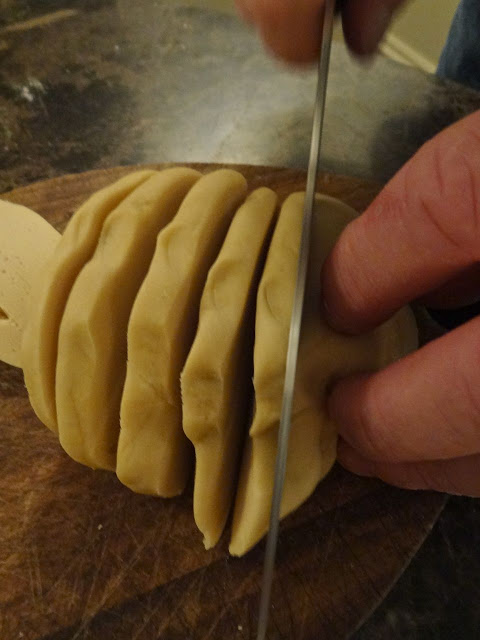 Cut the ball of pasta dough dough into 1/4-inch slices
Next step — the ball of dough is cut into 1/4-inch slices, and passed through the rollers of the pasta machine one slice at time, beginning with the widest setting on the pasta machine — #1. The process of passing the dough through the rollers is repeated, decreasing the setting, grade by grade with each pass, making the dough thinner and thinner until it reaches the desired thickness. In short, after setting #1, the dough is passed though setting #2, then #3 all the way to #5. After running the dough through this final setting, the sheets of pasta end up being about 1/16-inch thick and very long. 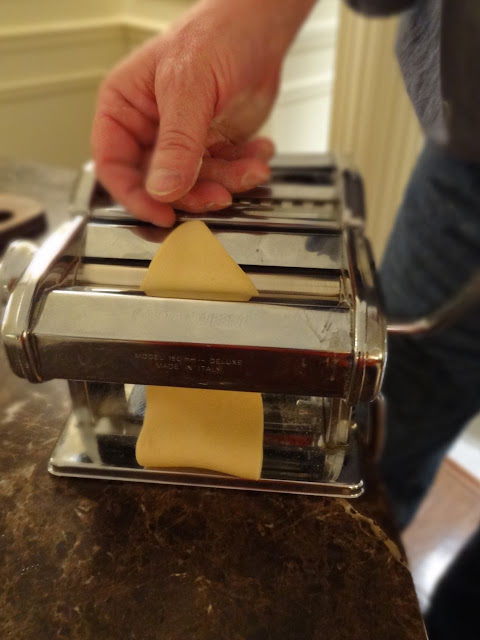 Passing the dough through the first setting - #1

The sheets are laid flat on a clean surface in preparation for cutting. At this point you have a choice — the dough can be hand cut using a pasta roller, or fed through one of the detachable cutters on the pasta machine, to make a uniform size fettuccine or spaghetti-shaped noodle. It's really a question of aesthetics. I made it both ways, hand-rolling and hand-cutting the dough the first time; processing and cutting the dough with the Marcato pasta machine on the second attempt. Both were great. 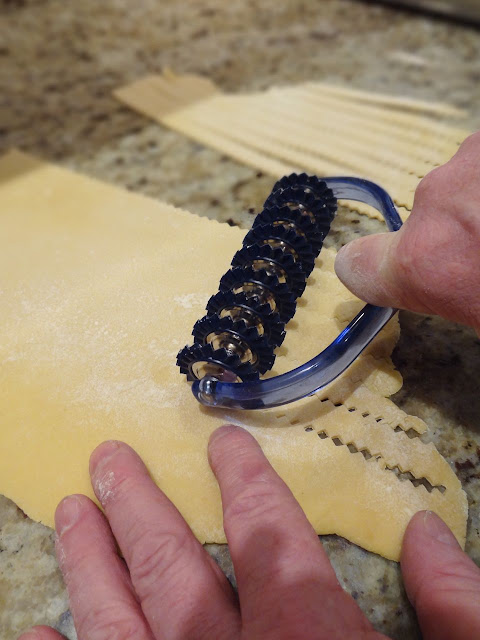 Cutting the Taggliatelle with a pasta roller 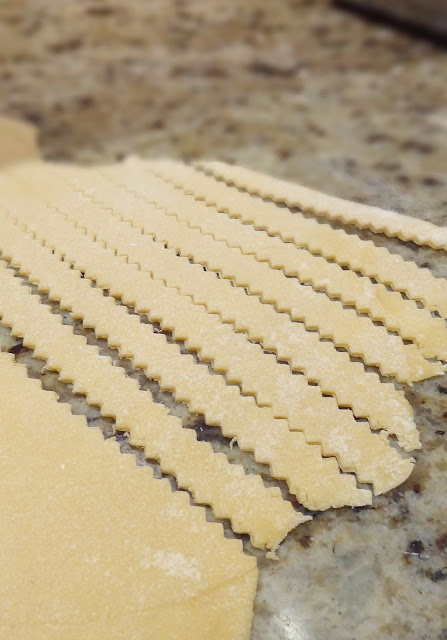 My first attempt at Taggliatelle — a success! 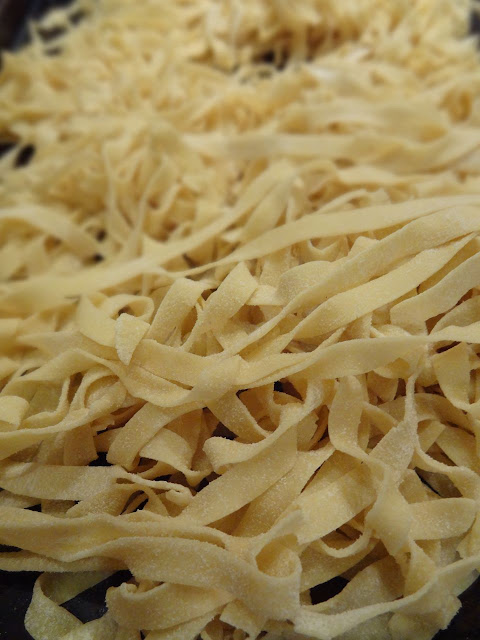 Taggliatelle cut using the pasta machine - looking very professional indeed
Once the noodles are cut, the only question is which delicious sauce to make the meal a complete success. Since Umbria is the only land locked region in Italy, meat is preferred over seafood as a rule, and pork in particular is very popular. Although beef would normally be used for a hearty meaty pasta sauce, this recipe for a traditional Umbrian Ragu calls for ground pork, chopped prosciutto, diced tomatoes and fresh herbs for a hearty, robust and delicious sauce for my homemade taggliatelle, which was absolutely scrumptious — Umbria here I come! 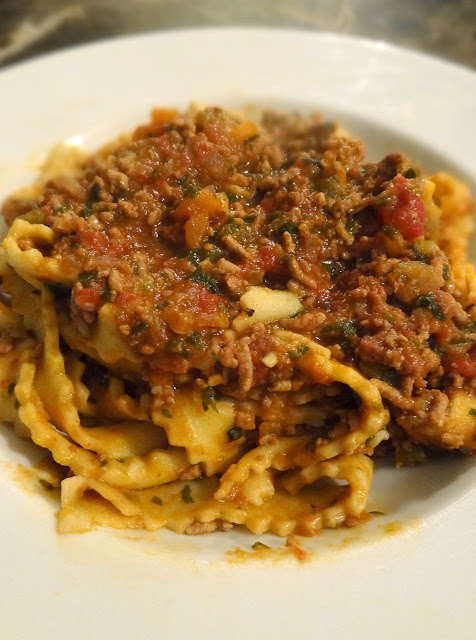 Pasta:
6 large eggs
1 1/2 cups semolina flour
1 1/2 cups Tipo 00 flour
1/2 tsp salt
1 tbsp olive oil
For the sauce, heat the oil in a large heavy saucepan and cook the celery, carrot, and onion over medium heat until tender, about 8 minutes.  Add the ground pork and chopped prosciutto and cook until the meat is no longer pink and has begun to brown.  Add the garlic and cook an additional couple of minutes.  Next add the wine and cook until it has almost completely evaporated.  Stir in the tomatoes, parsley, basil, salt and pepper, and bring to a boil.  Reduce the heat to a simmer and continue to cook for an hour and a half until the sauce has thickened.
For the pasta, mound your flour on a large pastry board, counter or bowl, and make a well in the center.  Break the eggs into this well and 1 tbsp olive oil, and start to scramble each egg with a fork as it is being added.  Start to incorporate the eggs and flour by slowly bringing more flour in from the inside edges of the well.  Continue adding the flour to the eggs until they are no longer runny.  Using your hands now, bring the outside edges in, forming a large mass on your board. Use only the amount of flour needed to form a soft ball.  Begin to knead the ball of dough as you would bread, pushing it down with the heel of your hand, and continue kneading until the dough is smooth and satiny, for about 8 minutes.  Wrap the prepared dough in plastic wrap with 1 tbsp olive oil, and let it sit for about 30 minutes.
Slice the dough into smaller pieces; take one to work with keeping the other pieces wrapped in plastic wrap until needed.  If rolling by hand, place the dough on a lightly floured surface and begin to roll the dough out into a rectangle dusting with flour as needed.  The dough should be about 1/16 of an inch thick.  If using a pasta roller (which is much easier!) begin to roll the dough starting at the widest notch, dusting it with flour as needed to keep it from sticking.  Continue to roll the dough, turning the knob to decrease the diameter until you get to the 5th setting.  Run the dough through this setting then lay flat on a clean surface in preparation for cutting.
Using either a sharp knife or fluted pasta wheel, cut into 3/8-inch wide strips, or whatever style you prefer. Lightly dust the dough as you separate the strands and continue to cut the remaining dough.  Use the pasta within about an hour of making it, or it may become brittle.
Cook the pasta in boiling salted water until it's cooked through and drain, about 2-3 minutes. Return the pasta to it's pot and add a large scoop of the sauce, tossing the pasta to coat.  Serve the pasta in individual warmed bowls with a scoop of additional sauce on top and freshly grated Pecorino cheese on the side.
Posted by leslie at Wednesday, January 18, 2012